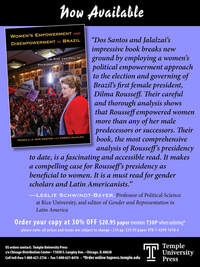 Research Agenda
My research focuses on Brazil's democratic institutions. Specifically, I have researched electoral rules, the Brazilian Congress, the executive, and executive-legislative relations. Most of my research is grounded on the representation literature and the ways in which elected officials represent their constituency. When thinking about representation in Brazil two specific groups spark my interest: women as a representational group and the growing evangelical population in the country.

​Abstract (English): This article explores the causes and consequences of extreme non-viable candidacies, also known as “ laranja ” (orange) candidacies in the Brazilian political lore. We first define and delineate what makes a candidate a laranja, engaging the comparative literature on sacrificial lambs and using district-level electoral results to operationalize the concept. We then advance a typology of laranjas with four ideal types that vary along dimensions of legality and intentionality. Next, we apply descriptive statistics and a hierarchical logistic regression model to explore the individual, party, and district-level characteristics of extreme non-viable candidates and assess whether and how laranjas are distinct from non- laranjas. Finally, we illustrate the gendered character of laranjas, documenting how the candidate gender quota law in Brazil has been associated with a proliferation of candidatas laranjas (women extreme non-viable candidates).

Abstract:​ The election of Dilma Rousseff as Brazil’s first woman president in 2010 and her controversial impeachment in 2016 added two more pieces to the puzzle of women’s representation in the country. Brazil has strong and vocal women’s movements but a poor track record electing and appointing women to all levels of government. This chapter explores the complicated relationship between women and political power in Brazil, focusing especially on the election of women to executive and legislative positions in the country. This chapter will first provide a brief overview of women in politics in Brazil, starting with the fight for suffrage and the election of Brazil’s first women politicians. Then it will explore the role of women in party politics from the Vargas era up until the early 1980s. We provide a more detailed discussion of the entrance of women into the contemporary (post Diretas Já) political system, examining the dynamic between political parties, the women’s movements, and women joining these parties, and descriptively analyzing the evolution of women candidates and women elected to all executive and legislative positions since the early 1980s. We conclude the chapter by discussing two critical events in the representation of women in politics in Brazil: the establishment and reform of the candidate gender quota and the election and impeachment of Dilma Rousseff.


Laura A. Dean and Pedro A. G. dos Santos (2017). “The Implication of Gender Quotas in Ukraine: A Case Study of Municipal Party-Level Elections in Eastern Europe’s Most Precarious Democracy.” Teorija in Praksa 54 (2).

Abstract: On July 17, 2015 a bill adopted by the Verkhovna Rada, the Ukrainian parliament, introduced a party-level gender quota of 30 per cent in local municipal elections. This paper examines the previous attempts to adopt quotas in Ukraine, as well as, the impact and effectiveness of gender quotas in local municipal elections. We analyze municipal election data before and after the implementation of the gender quota to explore in more detail the factors that influenced compliance and non-compliance with the quota, as well as the impact the quota had on the election of women. We determined that due to an unambitious quota rule with no sanctions for non-compliance, and in spite of a change to a proportional representation electoral system at the local level, women's representation did not significantly increase. We also found that in the post-conflict emerging democracy of Ukraine, the adoption of gender quotas sought to demonstrate that the new regime was more democratic and egalitarian than its predecessor by attempting to align itself with perceived European and International standards but then the ruling political party did not comply with the gender quota.
Tweets by @Professor_Dos